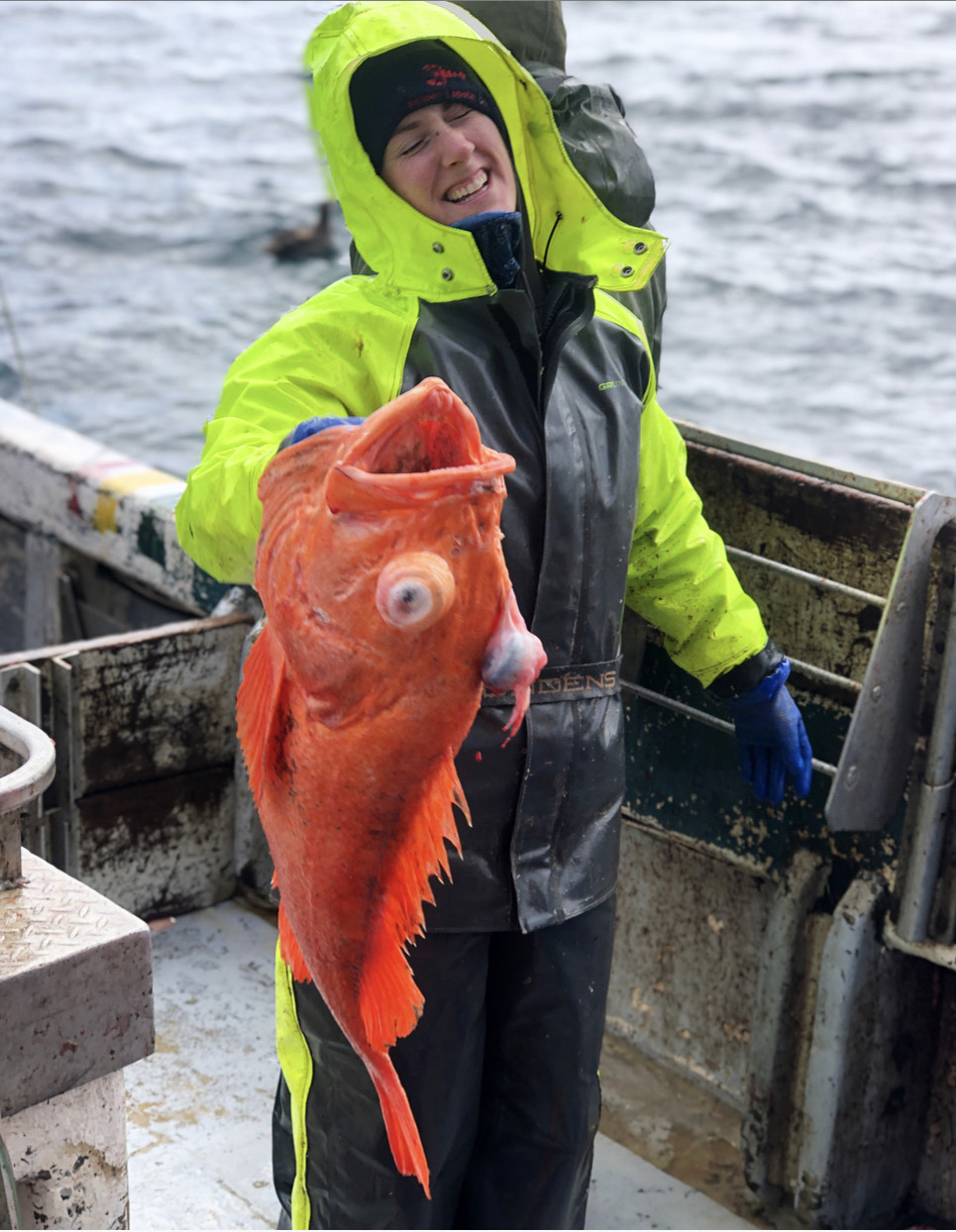 Over the next few weeks, we will be running a Q&A series featuring deckhands working on the BC coast. Many fish harvesters start their careers this way, working on several boats and in multiple fisheries over the year– this series aims to celebrate their hard work and give a taste of the fishing life.

Jana Bookholt is a deckhand who grew up in Halifax, Nova Scotia. She’s trying her hand at some of the West Coast fisheries and talked with us just after the spot prawn season. Below is a summary of our conversation.

BCYFN- Let’s start with where are you from and how did you start fishing?

JB- I'm originally from Halifax, Nova Scotia but I had been fishing on Grand Manan Island, New Brunswick for the past five years. Growing up in Halifax, I had always wanted to go lobster fishing. I suppose it was about six years ago, I met some people that were lobster fishermen in Grand Manan. They added me on Facebook and started posting lobster fishing photos. I asked if I could come try, they said sure, and I really liked it so I moved!

BCYFN- And how did you go from fishing in Grand Manan to French Creek?

JB- The funny thing is I’m out here because of Instagram. Basically I wanted a change, I wanted to try different fisheries. I reached out to a couple people on Instagram and was like, ‘Hey, what's it like out there?’. I talked to a couple of fishermen but one woman was really, really amazing- Lindsay Cowan (@crogtheterrible on Instagram). She was instrumental in me coming out here and immediately gave skippers my number. I love connecting with people who I wouldn't have gotten the chance to just because of geography. Instagram is great because you can make those connections.

BCYFN- So how has it been finding work since you've been here?

JB- Well, I got out here mid-March, a week before everything shut down from COVID-19. My dad and I drove across the country and it was lovely, we had a nice little road trip. My plan moving out here was to get my captain’s papers and then go prawning. I started doing one of the courses for my Fishing Master IV and a week into it everything shut down. So instead I went blackcod fishing. And then I went halibut fishing, and then I went prawning, and now I'm going salmon seining! I mean, I feel like I'm in the land of milk and honey here- like it's amazing. I've gotten so many calls from skippers since getting out West and that doesn't happen back home.

BCYFN- That’s great! Now that you've taste for some of the fisheries out West and out East, do you have a favourite?

JB- I love lobster fishing. Oh my god, I love lobster fishing. Because it's intense, you work so hard. Everything is heavy and there's just such intensity in your day. I also liked blackcod and halibut, it was fun. For blackcod we were offshore so that got rough, and sleeping was the hardest part but it’s not terrible. I think I'm really going to like seining salmon though. I seined herring once back home and I loved it so much. So I think I'm really going to like the salmon thing, we'll find out soon!

BCYFN- What would you say are the most challenging times out there?

JB- I’ll say spending a month with people you don't really know, the interpersonal parts. I'm used to going home every night. So, you know if one of my crew mates is driving me nuts, I just go home and hang with my friends. But here, you’re heading out for a month and you’re super isolated. It can be intense.

BCYFN- Do you have an idea how long you'll stay out in BC?

JB- I really like it…I'm kinda thinking about not leaving! I was originally going to give myself until October, but that was assuming I wouldn't be able to get a job right away. I got work right away and I've barely been on land since April- it’s amazing, I feel really fortunate. I was told it winds down here in November so I might go back home for lobster. But I'd also like to do my Fishing Masters IV and I’m not sure if any schools will be open. When fishing slows down I'll probably have to figure that stuff out. But until then, I came out here to fish and I’m just going fishing!

BCYFN- And what keeps drawing you back to fishing, what makes it so amazing?

JB- I get to see things that nobody else gets to see. I went out blackcod fishing and I got to spend a week anchored in Nootka, it was incredible! There’s something about being out there on the water- the worst day on the water is better than an average day on land for me. I just got off the prawn boat and told my friends I was going to have a week off before my next job. The next morning I was talking to a friend and already on a boat. My friends ask what’s wrong with me.. it’s just fishing. I like the boat life- I meet some really great people, I get to go to cool places, and free snacks, man. I like those snacks!

BCYFN- And what would you tell yourself if you were just starting out deckhanding?

JB- Go West? Kidding. Don't take no for an answer, just give ‘er. If you're into it, you're into it. People will recognize that. Take every opportunity you can. That’s what I've been doing. The most amazing stuff has happened by just saying yes.

BCYFN- Do you want to have your own boat at some point?

JB- I'm not sure. I'd like to run a boat. I don't know if I want to get my own, they’re expensive. But I don't really see myself being a deckhand for the rest of my life either. I don’t know what I’m going to do- I think cool opportunities always seem to present themselves though.

BCYFN- And what is the best thing to eat while you’re at sea?

JB- I like onigiri. I have a little onigiri mold that I got in Koreatown in Toronto years ago. I bring that with me and make my little sushi triangles with our catch. I like to eat stuff where you don't have to take your gloves off- I like intense fisheries so you have to be able to jam in your mouth and it can’t involve cutlery. And if you don't have time to eat today's it's still good tomorrow too! Yeah, onigiri for the win. And beef jerky. I have eclectic tastes, I guess.

BCYFN- What do you think the future of our fisheries, either on the East or West Coast may look like?

JB- Lobster numbers are doing pretty well. I'm not too sure about the West Coast management because I just got here, but everyone was catching prawns. The money is really good, and that surprises me. It’s pretty incredible when you can do a job like this without even a high school education and make decent money. I was in fine craft for 10 years, so you know, this is much better. Also, in five years back home, I had only been on one boat with one other woman. Here, the last boat I was on had a woman on it and there’s a woman on this next boat too. Life is good.

We’re happy to hear that, thanks for chatting!