BCYFN- Let’s start with where you’re from and how you started fishing.

Richard Michelson- I was born and raised in Sointula B.C. and am a 4th generation fisherman. I first got into it because I wanted money in the summertime and the thing to do when I was growing up was to go fishing.

I fished from 12-18 years old and then stepped out of the industry for 4 years to go mining up in the Yukon. My wife went to school in Australia for a year so I quit mining to move to Australia with her and when I moved back to Canada, I went fishing that summer with my dad Ross. We put in over a million pounds of pink salmon and thought that was more fun than going back mining. The following year I went and got my Fishing Masters 4 (FM4) and decided that I didn’t want to be a deckhand if I got back into the industry. With the help from my pal Jack Groven, I started running my first seiner, the Snow Queen, and turned a herring job into a prawn job. I enjoyed prawning but again, didn’t want to be a deckhand so after a few years I moved into running a boat for some Lasqueti guys but I wasn’t content with running a boat so I decided to buy (on the worst price year ever.) 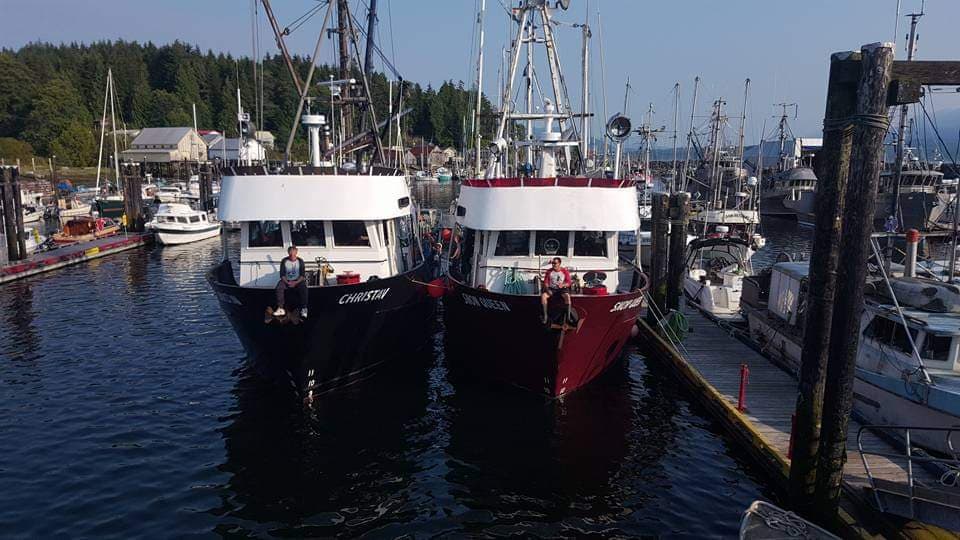 Growing up in Sointula, there was one thing to do when I was a kid. The docks were full, lots of people building and working on nets and a few of them were my dad and grandpa and aunties and uncles on both sides of my family, the Sjobergs and the Michelsons. They made it look fun. The atmosphere down at the docks was fun for a young fella, work always being done but lots of chattering; it was an atmosphere I wanted to be in. Lots of camaraderie amongst crews, my Grandpa had the same crew for years and years. My dad’s crew were his best friends. My uncles all ran boats. It came pretty naturally when I wanted to get back into it but I’m glad I stepped away for a few years because when I got back into it, there was no doubt that it was what I wanted to do When I was 18, I had lots of doubts, it was just what you did. After I left, I realized that I enjoyed it a lot more than I thought.

There was a clear path for me to get here due to the people I’ve met through my family ties and that helped me a lot. Once you get your foot in the door, if you want to work hard and do something, I think you can.

BCYFN- Is there anything you wish you’d known when you were starting out that you’d tell yourself now?

RM- I think when I left and came back into the industry, I learned how to treat people a lot better than would have happened if I had stayed in from the start because I saw how people were treated in other job scenarios. In fishing, the skipper is often at the top with the crew below and I wanted to be the guy at the front pulling the rope instead of being the guy pointing and telling people to pull the rope.

I wish I’d learned to mend net better. The business end of it I wish I had known better and still want to. It’s a work in progress.

BCYFN- What are the most challenging moments out on the water?

RM- Oh lots. Uncertainty is the biggest challenge; the uncertainty of prices, of openings. I think the most challenging times are to do with the upper-management and the business end of it - waiting to see what’s going to happen. The fishing part is the easiest and best part of it. It’s the uncertainty that makes it challenging for not only myself, but my crew. It’s challenging trying to relay messages to the crew when they need an answer but you don’t have one.

BCYFN- What makes fishing one of the best jobs?

RM- Moving up and down the coast, seeing remote places that few people get to see. Nothing replaces the feeling of coming into your homeport after a successful opening or season. There are usually smiling faces waiting at the dock that want fish and want to hear your stories of trials and tribulations. I love supplying good protein to people and knowing your catch is going to make a lot of people happy and seeing them around town to tell you how good your product is.

Growing up in a family where all your aunties and uncles and grandparents are involved, fishing talk is really in-depth. I don’t know that most people can talk to their grandparents as deeply as I talk to my grandpa about fishing.

I love the feeling of being smarter than fish when it happens, and it doesn’t happen often enough. Salmon are wily, and if you can get one step ahead of them it’s a great feeling. I love the competitiveness of fishing, there’s an aspect to all fisheries of competition that not every job has. 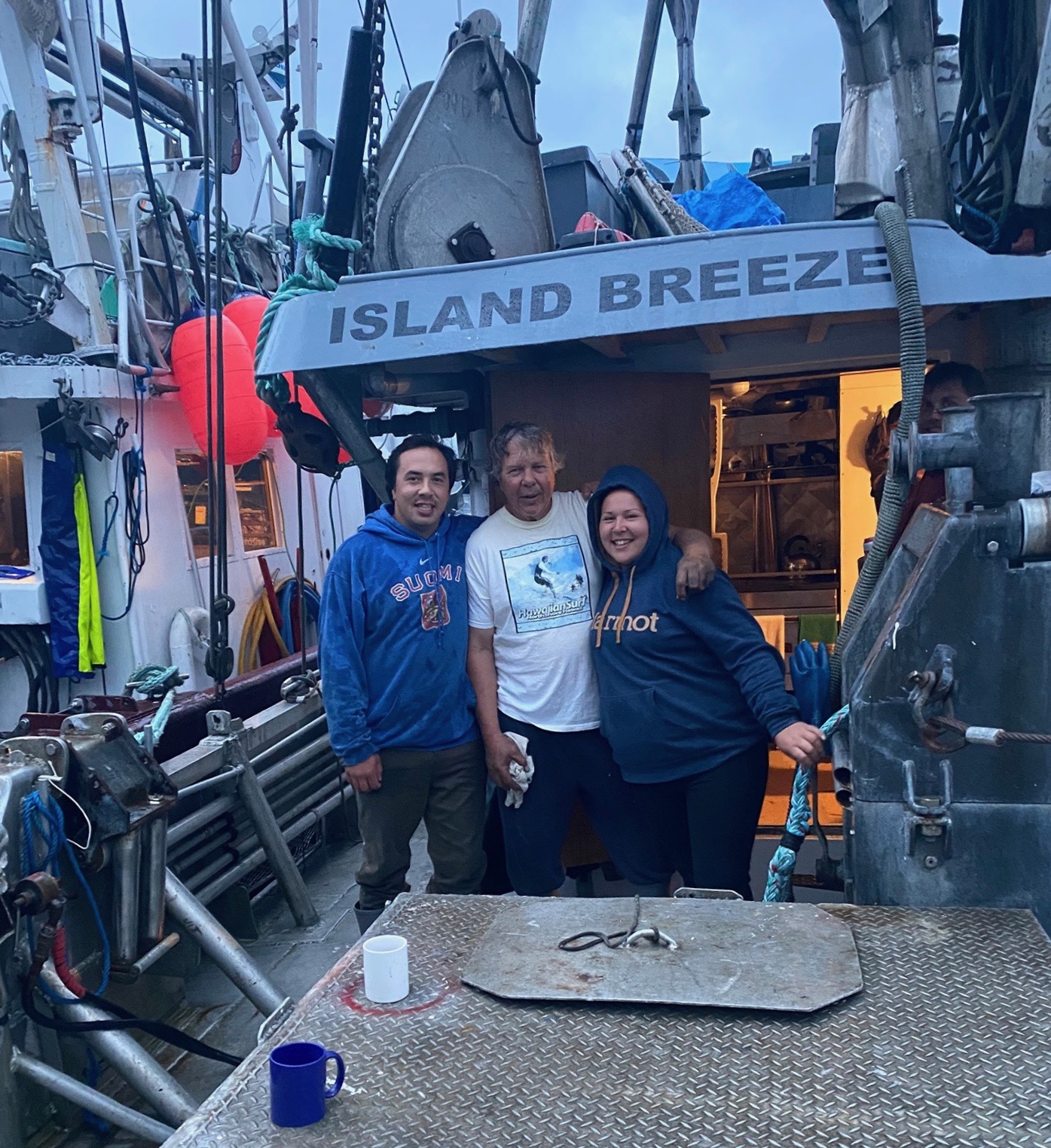 BCYFN- What would you say is most rewarding about fishing, or the best lesson you’ve taken from your work?

RM- To work with your crews and not have your crew working for you. I think that’s been an advantage to me coming into the industry so young and being a deckhand longer than I’ve run boats. Without my crew I’m nothing, I’m just a guy running around driving boats. It’s important to be part of the team which was something that wasn’t part of it in the 70’s, 80’s, and 90’s. People who still operate that way struggle to find crew and I’m glad that things are changing in that respect because it wasn’t a positive work environment. With a crew that wants to be there, you can be someone to make them a lot of money and make them enjoy their jobs.

BCYFN- What would you tell someone looking to get into the industry?

RM- If you’re going deckhanding, do your research on the boat; reach out to someone about that boat and fishery. Lots of people come in and out quickly and get screwed around and it leaves a sour taste. For people getting in, all fishermen are willing to talk-

Gerald (listening in)- Especially with a beer!

RM- - all fishermen are willing to talk and in doing that research, skippers will hold themselves accountable. If you pick your boats right you can make good money and you really enjoy your job.

If you’re coming in to be a skipper, you’re ready to move on to the next stage, pay attention to all the boats around you, the boats that are doing well and the boats that aren’t. Fishing, in my opinion, isn’t too hard of a formula to do well. You have to do well and pay attention to your surroundings. To say ‘work hard’ is an easy thing to say but with the competitiveness, everyone in the upper echelon are people who work really hard. Some have nicer boats than others but the formula is the same.

Buy good raingear! Get spare pairs of raingear, gloves, and boots. Wear gloves! Especially all you beachmen out there, you can take ‘em off when you’re not tying up.

G- Fill your pocket up with TP when you go to the beach to tie up!

RM- Get a memory foam mattress topper. A lot of boats have terrible bunks from the 70’s and 80’s and if you’re not rested, you’re not going to be productive.

BCYFN- What is your vision or hope for the future?

RM- My hope is that the salmon come back and I think the recent fish farm decision will help. I wish public opinion would change on fishermen, that people would view fishermen as people who care about fish. We need fish to be fishermen, we don’t need bad flack to go along with all our other challenges. We need more people’s support because DFO’s mandate is very regulated so if people could look at us more as people trying to provide food than pulverize - it isn’t an easy job as is. 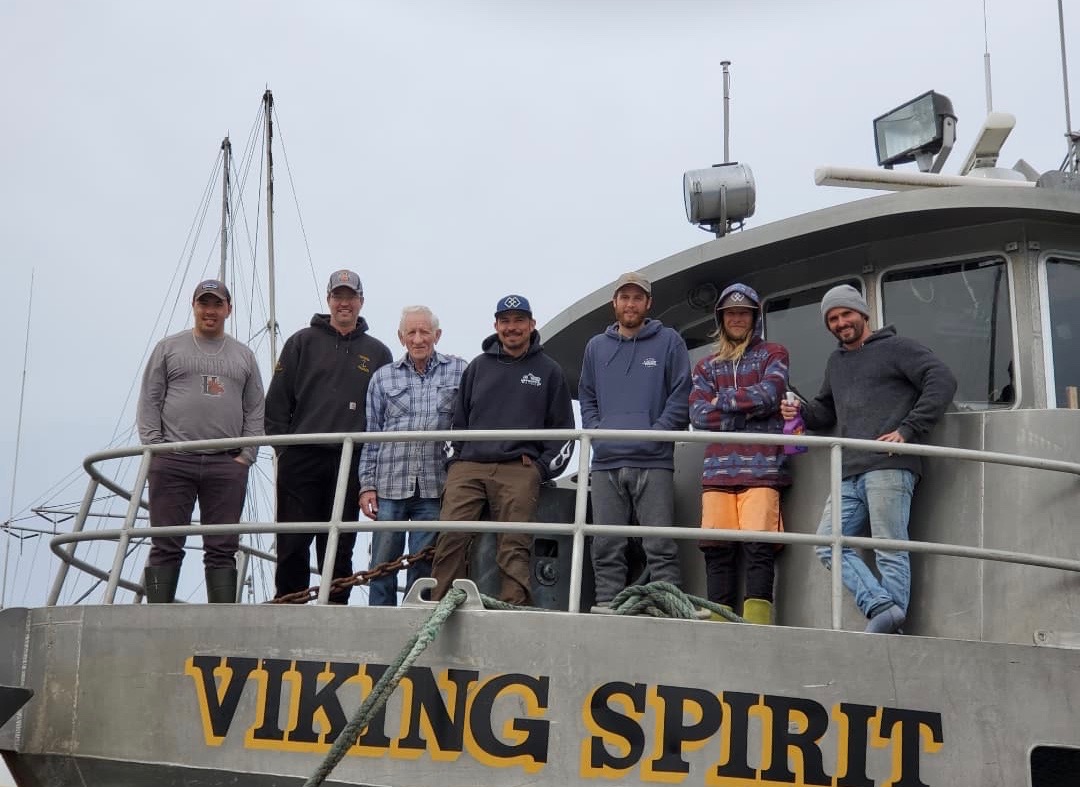 I speak for myself and the fishermen that I’m friends with. A lot of fishermen take a lot of pride in what they do and it goes back a long way back. I love hearing about a hot needle or someone yelling whoa when the net’s up in the block. The fishing industry is something I really enjoy and it’s sad when culture carriers go, there aren’t enough people coming in. I try to carry that on and I’d like to see that continue.

Organizations like BCYFN weren’t here 20 years ago and I think that’s why there’s a gap. It was all doom and gloom and not enough good stories. I like hiring young people, even if they cycle out in 5 years. I hope that young people keep steering toward the industry and it’s a great way for people to make money and for some people to make a living. It’s not for everyone but everyone who wants to, should experience it. I see myself as being a part of whatever happens in the future.

BCYFN- What’s your favourite meal when you’re out fishing?

RM: First sockeye of the year. Wade Shiels’ seafood fettucini. Fathoms of sausages. All the white fish. All the food that you can only get out there that’s just as fresh as can be. Late-night fruit crisps.

BCYFN- Your turn to pick the music, what are you putting on?

RM- Spectrum 8 days a week! When I’m by myself, country, but I don’t make everyone listen to that. Due to an older crew, I’m forced to listen to Classic Vinyl which can be redundant but when we’re heading in from a seine opening, we throw on the Classic Vinyl.

BCYFN- Lastly, what’s next for you?

RM- Having a baby! Excited about that. The herring gillnet fishery which is a phenomenal event. After that, I’ll be out on the herring dive spawn survey.

BCYFN- Thanks, Richard! Good luck on the herring and congratulations about the fisher-baby on the way!